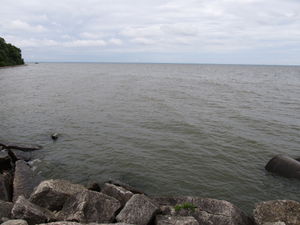 A view of the Bay of Green Bay from Bayshore County Park. Source: Ken Lund

Green Bay is a portion of Lake Michigan located west of the Door Peninsula. Green Bay pollution has long been problematic to the aquatic ecosystems due to industrial and nonindustrial forces at work. Big industries, both in the past and the present, have worked to pollute Green Bay through dumping wastes. The farming industry also plays a roll in the pollution through runoff from fertilizer. The overall effects of the pollutants have detrimental repercussions on the environment and society.

Since the 1600s, individuals have been utilizing resources in the Green Bay area. The region was established on the basis of trade of various furs such as beaver, otter, and mink. This industry flourished until 1834. [1] Beginning in the 1880s, agriculture, industry, lumberjacks, and commercial fishing dominated the region and greatly impacted. [2] 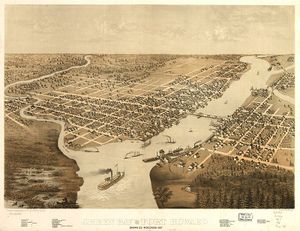 A bird's eye illustration of Green Bay in 1867. Source: A. Ruger

The agricultural industry began in Green Bay with the first signs of settlement. In 1836, the land was put up for sale with the first waves of settlers arrived around 1848, sparking the beginning of agricultural practices.[3] As Wisconsin began to increase in population, the agricultural aspects of the state grew as well. Runoff from fertilizers placed on crops and the more direct source of natural fertilizer from livestock, would eventually find its way to water sources that lead to the bay. The fertilizer drastically changed the aquatic environment of the bay.

Paper mills were first introduced to the region in the 1850s, and the industry progressively grew over time. A huge leap in mills occurred between 1870 and 1890. By 1900 there were more paper mills than there are today. [4] These mills were among the first main dischargers of industrial waste into Wisconsin's waterways.

Point source pollution is water pollution that is caused directly from the discharge of industrial waste. Water treatment plants such as NEW Water work to treat water that comes to the plant, cleaning and filtering it to make it safe to deposit into the bay.

Pollution of the Bay of Green Bay greatly impacted the region. Not only did it affect the natural environment through the creation of dead zones, but it also affected recreational activities.

Surrounded by various beaches and beautiful natural areas, swimming used to be a regular activity in the Bay of Green Bay. Because the amount of pollution has increased so drastically, swimming is no longer safe. Efforts are now being made to get the water back to a safe enough level that swimming could be possible again.

The water pollution in the Bay of Green Bay has been been notorious for causing dead zones. Dead zones are areas within the bay where the amount of oxygen that is able to be dissolved in water is less than normal. [6] The reduced amount of oxygen in the water makes it difficult for the water to support life. In the case of Green Bay, the problem of dead zones is most closely related to the large amounts of phosphorus making its way into the water. [7] The pollution problem is so vast that dead zones in Green Bay are now annual occurrences. The 2015 dead zone, extending from Dyckesville to Sturgeon Bay, "covers about 30 percent to 40 percent of the bay". [8]

Responses and Clean Up

In 1988, the Lower Green Bay Remedial Action Plan was put into effect. The goals of the project are to create a healthy aquatic environment that allows for "water-based recreational opportunities" such as swimming, boating, and fishing; improving water quality to create "drinkable water after standard treatment"; and creating an overall balanced environment that is healthy for aquatic plants and organisms. [10]

Alongside the direct cleanup of Green Bay, proposals have been made to reduce problems in the future. One proposal suggests that industries pay "$50 for every pound of phosphorus discharged above their permitted levels, up to a maximum of $640,000 a year. The counties would use that money to implement conservation practices locally". [11]